Gaston Barrette is retired from the Quebec Department of Education. He has been collecting stamps on stamps issues since 1992. For the last few years he has been interested in postal stationery related to the stamp on stamp topic. Gaston has been collecting Canadian stamps for most of his life. He can be reached at 403-2765 Chemin Sainte-Foy, Quebec GIV 4S4, Canada.

This article is based on the following:

Introduction
What is Postal Stationery? When the postal authority of a country produces stationery (envelopes, postal cards, aerogrammes, etc.) with a printed stamps (indicia) designed to indicate payment the appropriate postage, those items fall into the category of "postal stationery." These stationery items are absolutely suitable for philatelic collecting purposes. The indicia and anything printed on the items by the government are appropriately collectible.

There are many difference between postal stationery and stamps, the most important difference being size. An envelope, postal card, or an aerogramme are each larger than stamps, although some souvenir sheets may sometimes be bigger. The second difference is the indicium which is an integral part of the item whereas an adhesive stamp on a cover or a post card is not. The third is that most of the postal stationery space is provided for written messages. Finally, the item of postal stationery can be used on both sides which is hardly the case for stamps.

As for similarities between postal stationery and stamps the following can be mentioned. Items are collected mint and used. Condition is an important part of determining value. Varieties and errors are possible. They can be collected by the topic they illustrate: art, automobiles, flags, movies, stamps on stamps (SOS), etc. Finally, they are issued by postal authorities, often with first day ceremonies.


A Brief History of Postal Stationery
Postal Stationery is older than the adhesive stamp. The Venetian "A-Q" letter sheets date from 1608; the Sardinia sheets from 1818; the revenue devices on British newspapers provided free postage after 1821; and the Sidney, New South Wales letter sheets were issued in 1838. We all know that the first adhesive stamps were not issued until 1840. Stamp catalogues included postal stationery up to about 1920 when the publishers decided there was not enough interest in postal stationery to continue to list it. The stamps had gained so much popularity and issues became so numerous that stamp collectors lost interest in postal stationery. This happened after the First World War, but beginning in 1945 there has been a marked revival of interest. Postal stationery is now perhaps the fastest growing branch of philately.


Catalogues of Postal Stationery
The Higgins and Gage: World Postage Stationery Catalog remains the universal reference work even though it has not been updated for decades. There are some updates, but these are merely price changes and they are well out of date. The complete set consists of 19 volumes and sells for about $230. There are other catalogues of postal stationery. Some of them cover postal stationery for a country, some for a topic, and one catalogue is devoted to a particular type of stationery; this is Kessler's Catalogue of Aerograms. One can also find new issues in World Postal Stationery New Issue Report published three times a year by Classic Philatelics. The latter report serves as a basis for a regular feature in Topical Time. However, no complete list of postal stationery is available as compared to the Scott, Gibbons and Michel catalogues of adhesive stamps, although some specialized catalogues include postal stationery.


Postal Stationery and The Stamps on Stamps Topic
Postal stationery related to the topic of stamps on stamps is a relatively small part of SOS collecting, but a fascinating part nevertheless. An example of an SOS postal stationery item is shown in Figure 1. 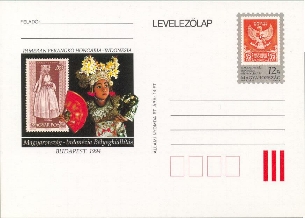 Figure 1. Hungarian postal card issued in 1994 for Budapest '94.
The indicium features Indonesia #359, while Hungary #1539 is featured in the cachet.


Figure 2 illustrates an Australian envelope also featuring SOS in the indicium and stamps in the cachet. 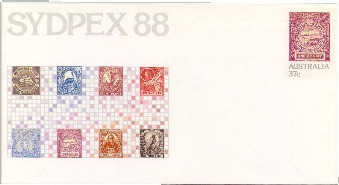 
A look at the items of postal stationery the ATA Handbook #122 shows that postal stationery items number about 30 as compared to a few thousands for stamps. However, this aspect of the topic is not to be neglected. To overlook it means that something important is missed. Most designs and executions of postal cards and envelopes are superb, many are steel engravings. More recent issues, especially aerogrammes, appeal to a topical collector through their artistic designs and the numerous colors employed.


SOSCU and Postal Stationery
In an effort to list the known SOS postal stationery, I have started with the items of postal stationery recorded in ATA Handbook #122 and arranged the listing according to dates of issue. Secondly, SOS postal stationery items classified under the topics "Philately and Postal Service" and "Stamp on Stamp" in the regular feature of Topical Time have been assembled for the period 1992-96. Since only a fraction of these items meet the criteria of the stamps on stamps topic, I am seeking collaborative agents to provide the information to complete the definitive list. A list of issues for 1989-1996 is given in the following list.


Missing Items
Because of the lack of a complete and therefore almost "official" list, it is near certain that there are items of postal stationery missing in ATA Handbook #122. 1 have in my collection five items from Romania that possibly belong to our topic but are absent from the handbook. Two of these items are described below:

Another item of postal stationery not in the ATA Handbook #122, but illustrated in Topical Handbook #131, page 31, is a Russian air envelope (or aerogramme) of 6k commemorating in 1976 a 10th anniversary. The indicium is a stamp on stamp, probably type U. The cachet shows four Russian stamps that I could not identify.


An Invitation to Complete the List
It is hoped that very few items of postal stationery qualifying for inclusion in our stamp on stamp topic remain unrecorded. However, if you think that you possess such items or have seen them in publications or other sources, you are cordially invited to point them out to me by sending photocopies or indication of sources. This will greatly help in their preparation of the definitive list.

A little reminder of the characteristics of a stamp on stamp postal stationery item: an envelope, aerogramme, postal card, etc. with a printed stamp (indicium) which is an SOS type A, B or U; and/or an item with one or more stamps (SOS or not) on the cachet (usually on the left side of the stationery). The following table gives the four acceptable combinations of indicium and cachet:


End of this article.